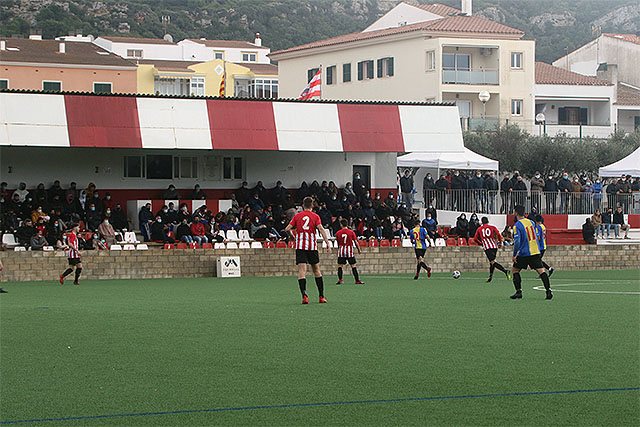 Mercadal’s perfect record remains after a dramatic late penalty win over UD Mahon. UD Mahon had twice equalised goals from Guillem Marti, only for a handball in the final minute to gift the reigning champions a penalty, which Gabriel Aguilar converted for a 3-2 win.

Sporting Mahon registered their first win of the season as they thumped Penya Ciutaella 5-1. Jorga Sosa and a David Ruz own goal gave them a 2-0 lead at half time, and further goals from Sergi Barber, Joel Nicolas and Eleuterio Serrano helped them romp home. Marc Fuster scored a late consolation for the hosts.

It looks like being another long season for the Ciutadella teams, with Atletic suffering their fifth successive defeat, going down 4-1 at home to CE Ferreries. All five goals came in the second half, with Xavier Muro and Oscar Roca putting the visitors in command. Jaime Marti pulled a goal back with 15 minutes to play only for Osmar Sabaly’s penalty five minutes later to end the game as a contest. David Febrer added a fourth in the last minute.

Ramon Huescar came off the bench to score his second hat-trick of the season as Alaior beat Atletico Villacarlos 4-0. Eric Mercadal had given the hosts a first half lead and after he was replaced by Huescar at half-time, the striker scored a penalty and two more to take his tally to 10 for the season.

UE Sami came from behind to beat CD Menorca 3-1. The visitors led through Marc Gelabert on 12 minutes, only for a contested penalty from Ignasi Cortes to level the scores. Ayoub Bouzalmata put Sami in front before half time and Vincent Pico added a third.

The sixth game of the round, between CCE Sant Lluis and CD Migjorn, was postponed due to a coronavirus outbreak at Sant Lluis.