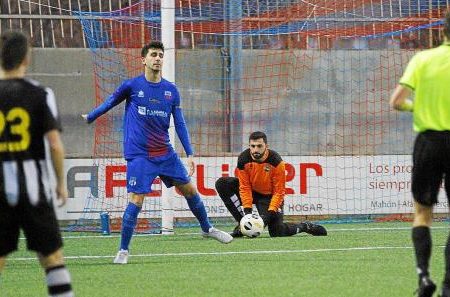 Migjorn dropped their first points of the season as UE Sami propelled themselves in to the promotion race with a 3-2 away win to start the New Year.

It was a late show by the visitors, who trailed 2-1 with just five minutes to go, but pinched points thanks to Juan Lopez’s equaliser and Vicent Pico’s injury-time winner.

That result meant champions Mercadal tightened their grip on top spot, moving three points clear with a seventh win from as many games this season. Their latest victory came away at Atletico Villacarlos, who had taken a surprise lead in the first half through Max Rodriguez.

Mercadal led 2-1 at half-time, thanks to Miguel Capo and a Ricardo Gerez own goal, and Ruben Races’ strike barely a minute in to the second half virtually ended the game as a contest. Guillem Marti added a fourth and Elliot Galan wrapped it up 12 minutes from time.

CE Alaior are the only other unbeaten team in the league, but they needed an injury-time penalty save to earn their point at CD Menorca. Eric Ayala was the hero for the visitors in the goalless draw, that keeps them in third place, now just a point behind Migjorn.

UD Mahon’s promotion chances already look in tatters after they suffered a shock 3-0 home defeat to Penya Ciutadella, their fourth defeat of the season. The hosts dominated the first half but fell behind to Ignacio Pons on the stroke of half time. Penya then struck twice on the counter attack in the second half, through Sergi Pons and Xavier Marques, to move level on points with their opponents in the league table.

CE Ferreries and CCE Sant Lluis shared the spoils in a 1-1 draw that does little for either side’s hopes of jumping up from mid-table and in to the play-off chase. Both goals came inside the first 10 minutes, with Frank Bonilla giving Sant Lluis the lead, only for Alberto Vaquero to equalise soon after.

Atletic Ciutadella remain rooted to the bottom with no points after they were beaten 2-1 away at Sporting Mahon. Joel Sanchez’s brace, either side of Julian Castro’s goal on the hour, earned the hosts a second win of the season.

Results (Round 4, but technically Matchday 7!)