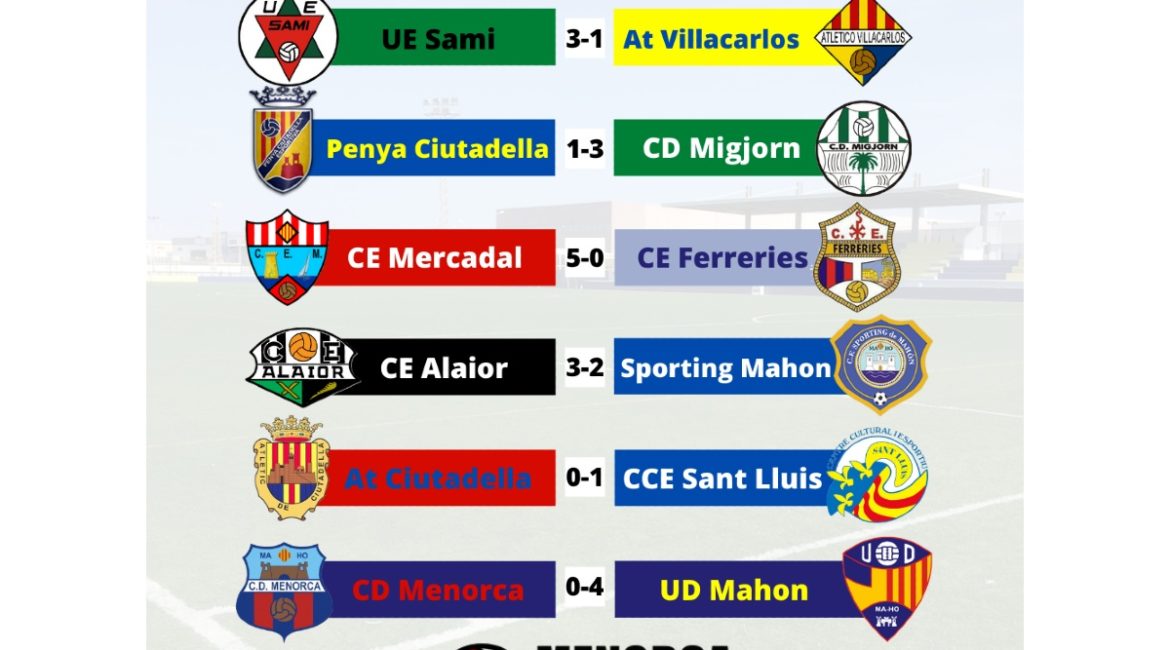 Champions CE Mercadal set their stall out for the season with a 5-0 demolition of CE Ferreries on opening day. Elliot Galan and Guillem Marti both scored braces, before Raul Marques added a fifth in the 89th minute.

It was their first game since they lost twice on Mallorca back in July, first in the promotion play-off, and then in a match for a place in the Copa del Rey.

In the curtailed league campaign in 2019/20, Mercadal won 11 and drew one of their 12 games, and will surely be the team to beat again.

The treble winners from the previous season, UD Mahon, started with a fine 4-0 win over arch rivals CD Menorca in the capital.

Two goals within six first half minutes from Alfonso Collado and Luis Martinez put the Unionists two to the goal, and Collado added a second on the hour mark. Javier Lacueva completed a fine afternoon with the fourth in the 89th minute, on a game that was apparently shown on the CD Menorca TV channel.

A penalty from Toni Vinent was enough to secure CCE Sant Lluis a 1-0 win away at Atletic Ciutadella on Sunday afternoon. It was the 10th successive win for Sant Lluis in meetings between the two sides.

Atletico Villacarlos’ return to the league following a seven-year absence was marked with a defeat, as they went down 3-1 to UE Sami. Ironically, their last game back in May 2013 was also against UE Sami, finishing 6-2.

It had looked like starting well for them when they took the lead in the 35th minute through Jonathan Mendez, only to be pegged back right on half-time by Ignasi Cortes’ penalty for the hosts.

Pedro Anglada put Sami in front seven minutes after the restart and they made the game safe in the final minute of normal time through Vicent Pico.

All five goals came in the second half as CE Alaior got the better of Sporting Mahon.

A 13-minute hat-trick from Ramon Huescar looked to have earned the hosts the three points, but Sporting mounted a comeback as Antonio Trujillo marked his return to the club with a goal, and Eleuterio Rodriguez got them back within one with 10 minutes to go, but it wasn’t enough.

One of last season’s strugglers were Penya Ciutadella, and they opened this campaign with a 3-1 defeat at home to CD Migjorn.

Migjorn led at half time through Kevin Grajales, but Penya equalised from the penalty spot through Anthony Castro with 20 minutes to go.

Juan Egea struck nine minutes from time to restore Migjorn’s advantage, and as Penya pressed for a late equaliser, Josep Sales made the points safe in the fourth minute of injury.