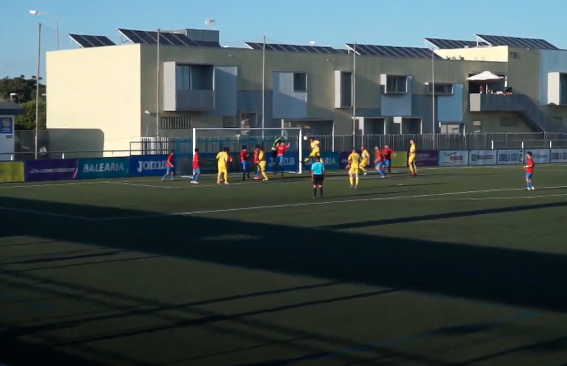 Mercadal’s promotion hopes were dashed by a 2-1 defeat to Porreres at Son Malferit.

The Menorcan champions were beaten by two second half goals which means the island will have no representative in the Tercera Division for the second successive season.

The manner of the decisive second goal will be a bitter pill to swallow, the weakest of free-kicks conceded on the edge of the box, from which goalkeeper Cristobal Jover couldn’t hold on to Adrian Galiano’s effort, enabling substitute Vicenc Nadal to nip in and score the rebound.

Mercadal might have already had a grievance by that point, having had a penalty shout turned away in the opening quarter of the match, although there had looked to have been a foul by them missed by the officials in the build up anyway.

They started the match slowly but still forced the first corners of the game.

There were few clear cut chances in the first half, Porreres going close through Miquel Mulet, who headed over from a Galiano cross, and then lively forward Sebastian Sanchez cut in from the left and fired over on the stroke of half time.

Mercadal’s golden opportunity to seize the initiative came 13 minutes after the break, when Elliot Mercadal was released slightly to the left of the middle, but fired his shot straight at Sebastia Cabrer.

Needing just a draw to secure their passage to next week’s final, it looked like Mercadal had the initiative in the second half, but a loose pass in midfield was pounced upon by Sanchez, and he launched a counter attack, cleverly beating two men and then sliding the ball through to Porreres captain Galiano, who finished tidily past Jover on 64 minutes.

The gamebreaking moment came 10 minutes later when Mercadal left-back Antoni Gomila was trying to deal with a difficult bouncing ball 25 yards out from his own goal. Sanchez was chasing the ball down and as the two barely clashed, he went down holding his face as if contacted with the arm of Gomila, the whistle went and Porreres had a free-kick from nothing.

Jover got down awkwardly to his right to parry away the free-kick, only for it to fall straight in to the path of Nadal and that was 2-0.

It left a mountain to climb for the Menorcans, and though they enjoyed the better of the final phase, they just couldn’t find the two goals they needed.

A flurry of corners resulted in at least one goal, Ruben Carreras’ left wing corner headed in at the back post by Cristian, with three minutes to play.

They just couldn’t muster a second, and it means no immediate return to Tercera for Mercadal, relegated last summer; and leaves them facing another season in the Regional Preferente Menorca.