Mercadal pull clear at the top

Mercadal pull clear at the top 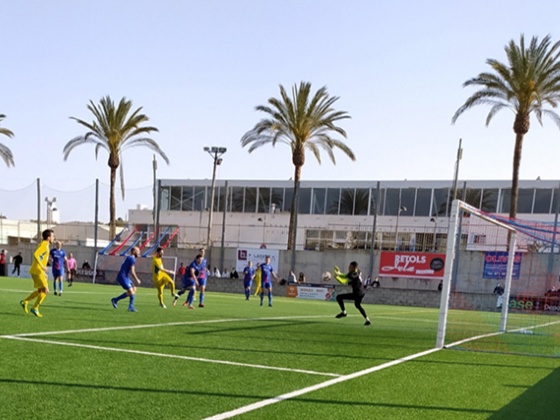 Mercadal are now nine points clear at the top of the table after all three of their nearest challengers dropped points last weekend.

The reigning champions were 2-0 winners away at CD Menorca, their 10th win in as many attempts this season.

Guillem Marti fired them in front inside three minutes and Elliot Galan added a penalty early in the second half.

Two of the contenders for second place, CE Alaior and UE Sami, shared the spoils at Los Pinos to lose ground on the leaders.

Both sides were reduced to 10 men in the 25th minute, with Sergio Pons and Jordi Conejo sent off, and they went on to battle out a 2-2 draw.

Also in the race for second place are CD Migjorn, who were held to a 1-1 draw at CE Ferreries.

They trailed to a Carlos Febrer penalty early in the second half but despite the sending off of Marcos Vaquero, managed to rescue a point through Josep Sales.

Penya Ciutadella are fifth in the table after winning 3-1 away at Atletico Villacarlos, while Sporting Mahon registered their fourth win of the season, beating Sant Lluis 2-1.

Nil Garcia and Jorge Mitrani scored the goals for Sporting, who remain level on points with UD Mahon, who won 3-1 at home to Atletic Ciutadella.